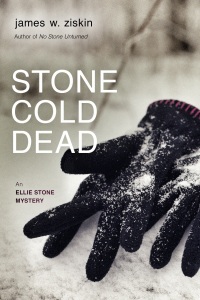 A child’s life is precious. Unless she comes from the wrong side of the tracks.

December 21, 1960, the shortest day of the year:
Fifteen-year-old Darleen Hicks slips away from her school bus as it idles in the junior high parking lot, waiting to depart. Moments later the bus rumbles away without her, and she is never seen again.

New Year’s Eve 1960
The small upstate town of New Holland, New York, is in the grips of a severe cold snap, when Ellie Stone receives a late-night caller, Irene Metzger, the grieving mother of Darleen Hicks. She tells Ellie that the local police won’t help her, that they believe Darleen has run off with some older boy and will return when she is ready. Irene has read Ellie’s stories on the Jordan Shaw murder case in the paper (see No Stone Unturned) and believes Ellie is her last hope.

Stone Cold Dead takes Ellie Stone on a chilling journey to a place of uncertainty, loss, teenage passion, and vulnerability—a place where Ellie’s questions are unwanted and her life is in danger.

KINGS RIVER LIFE MAGAZINE
(CLICK FOR FULL REVIEW)
The author succeeds in realistically conveying the impulsive antics of a determined heroine who fights for recognition as well as for justice. Humor blends with tragedy as the story unfolds, but without overwhelming one another with the two tones meshing into one compelling conclusion. In this third of the Ellie Stone mysteries, readers see a woman who has grown confident in her skills as a reporter even as she continues to fight against a society that has yet to fully accept her.
–Cynthia Chow
+++++++++++++++++++++++++++++++++++++++++++++++++++++++

STEVE READS, Mystery Monday
(CLICK FOR FULL REVIEW)
And of course the third and clinching thing that sets these mysteries apart is Ellie, who adheres to no tired stereotypes, indulges in none of the flatly unbelievable behavior that 21st century female crime-solvers tend to get up to (this book’s title doesn’t start with “The Girl Who,” thank God), and is always ready with both a sarcastic quip and a leap of courage that sometimes surprises even her. It’s great fun following her through these adventures (and you need not have read the first two in order to enjoy this one) – the only weird thing is remembering: she’s a grandmother by now.
–Steve Donoghue
+++++++++++++++++++++++++++++++++++++++++++++++++++++++

INTERNET REVIEW OF BOOKS
CAUTION: Some spoilers
(CLICK FOR FULL REVIEW)
Mystery writer James W. Ziskin is back with the third entry in his Ellie Stone series. Set in an unusual time and place for a mystery and featuring an unforgettable protagonist, it’s easy to see why this series has become so popular.

MYSTERIOUS GALAXY
(CLICK FOR FULL REVIEW)
Ziskin’s Ellie Stone investigative reporter series just keeps getting better and better with each book. The third title, Stone Cold Dead, once again showcases Ziskin’s mastery of language. Ellie is my kind of gal—she’s witty, relentless, and doesn’t apologize for throwing back a whiskey after a rough day. But underneath that tough exterior is a young lady who’s haunted by her past and still aches for her late father’s acceptance. This shared vulnerability and sense of loss is what connects Ellie to Darleen Hicks, a local fifteen-year-old girl who turns up missing. Ellie’s investigation takes her on an emotional rollercoaster ride of her own as she peels back the layers of a young teenage girl’s tragic journey. This smart eloquent thriller with its nostalgic 1960s upstate New York setting will make every reader an Ellie Stone fan if they’re not already.
+++++++++++++++++++++++++++++++++++++++++++++++++++++++

SAGECREEK
(CLICK FOR FULL REVIEW)
James W. Ziskin is an excellent storyteller who offers up more detail and dialogue than many other mystery writers provide. He also lets his “I” character have more time for introspection and internal debate than is common in investigator stories. This lets us see more deeply into process of how Ellie solves a case.

STONE COLD DEAD
Newspaper reporter Ellie Stone is the appealing star of Ziskin’s series set in the 1960s. Female journalists, few in number, are usually assigned light human interest stories, but Ellie is determined to cover hard news. She’s a smart young woman who confidently stands up to those who criticize her ambition. This story about a missing teen is dark and disturbing. Ellie’s relentless investigation delivers a gripping read.

Set in late 1960 and early 1961, Ziskin’s intriguing third Ellie Stone mystery (after 2014’s No Stone Unturned) finds the feisty “girl reporter” still trying to make her bones in the all-male newspaper world. A late-night visit from a desperate mother lures Ellie into a missing person’s case in New Holland, N.Y. Since 15-year-old Darleen Hicks disappeared shortly before Christmas, the police have made little effort to locate her, figuring that she’s run off with some hood. But Ellie’s questions begin to rattle a few cages, and she soon has to contend with Darleen’s bully of a stepfather, the girl’s juvenile delinquent boyfriend, an ominous farmer, an amorous teacher, and another reporter desperate to steal the story. After Ellie is attacked, the police take the case much more seriously. Ellie is a refreshing, riotously funny amateur sleuth. Spot-on language and perceptions of the era are a plus. Agent: William Reiss, John Hawkins & Associates. (May)

I confess that I read mysteries for character first and plot second. Ziskin’s Ellie Stone books shine on both levels. Ellie has everything I want in a protagonist: brains, guts, and yes, foibles. She drinks, smokes, and sleeps around, in part to smother the guilt she feels from a troubled relationship with her father, but also because she’s a real human being with real human weaknesses. From a mystery perspective, STONE COLD DEAD is the best of the series so far, and that’s saying a lot. I won’t reveal spoilers, but it includes a McGuffin that simply floored me with its logic and creativity. The atmosphere is fantastic, too. I grew up in nineteen-sixties New York, and Ziskin’s evocative writing never fails to bring me back to that era and the cold, rugged regions upstate. Whip-smart dialogue and vivid characterization also distinguish this series. Do yourself a favor and read these books. You won’t be disappointed!
–Lynne Raimondo, author of the Mark Angelotti novels DANTE’S WOOD, DANTE’S POISON, and DANTE’S DILEMMA.

“It’s winter in an upstate mill town in 1961, and Ellie Stone is at it again: fighting injustice, indifference, and bigotry in this pitch-perfect antidote to nostalgia. The characters are flawed and absorbing, the mystery is clever but convincing, and the pain of grief and loss catch you in the throat along with the wet wool, stale smoke, and whiskey. Tremendous.”
—CATRIONA McPHERSON, Anthony, Agatha, Macavity, and Bruce Award-winning author of the Dandy Gilver series and Come To Harm

“Stone Cold Dead draws you in with its rich, seductive prose portraits. Ziskin’s masterful, suspense-driven storytelling keeps you turning pages as fast as you can.”
—JEFFREY SIGER, international bestselling author of Sons of Sparta

“It might seem that she can hold her liquor more easily than she can hold onto a byline, but, in her third outing, whip-smart, dogged reporter Ellie Stone confirms she can certainly hold her own when it comes to the men who run every institution she encounters. In this dark, well-paced drama, the engaging Stone excavates disturbing facts about the life of a missing teenaged girl. The challenging theme is well served by its noir style and crackling dialogue. Revel in the early ’60s nostalgia, but throw away the rose-tinted specs.”
—CATHY ACE, author of the Cait Morgan Mysteries, and the WISE Enquiries Agency Mysteries

James W. Ziskin’s whodunit Stone Cold Dead has more twists and turns than an upstate New York back-county road. Ellie Stone is the kind of gal you’d want to share a malt with . . . or a fifth of Scotch.”
—MATT COYLE, Anthony Award-winning author of Yesterday’s Echo and Night Tremors

This site uses Akismet to reduce spam. Learn how your comment data is processed.