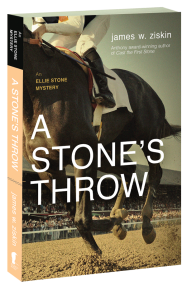 “The lonely, well-developed Ellie is the conscience of this cinematic story that has a strong sense of place but in which the characters shine most.”
—Library Journal

“The carefully constructed plot unfolds in unexpected ways as tough, ambitious, and dogged Ellie follows clues in the horse-racing mecca of nearby Saratoga Springs. Ziskin keeps readers guessing every step of the way.”
—Publishers Weekly

August 1962. A suspicious fire claims a tumbledown foaling barn on the grounds of the once-proud Tempesta Stud Farm, halfway between New Holland and Saratoga Springs, NY. The blaze, one of several in recent years at the abandoned farm, barely prompts a shrug from the local sheriff. That is until “girl reporter” Ellie Stone, first on the scene, uncovers a singed length of racing silk in the rubble of the barn. And it’s wrapped around the neck of one of two charred bodies buried in the ashes. A bullet between the eyes of one of the victims confirms it’s murder, and the police suspect gamblers. Ellie digs deeper.

The double murder, committed on a ghostly stud farm in the dead of night, leads Ellie down a haunted path, just a stone’s throw from the glamour of Saratoga Springs, to a place where dangerous men don’t like to lose. Unraveling secrets from the past–crushing failure and heartless betrayal–she’s learning that arson can be cold revenge.